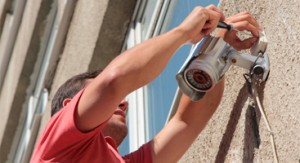 We’ve mentioned before how security camera systems have gotten so much better over the years. And it’s a good thing they have, because now anyone can afford to protect his or her home and family with a home security system.

So, what advantages does your modern surveillance system have over something from, say, a late-1970’s bank security camera?

There’s probably no bigger change from an older system to a newer one than the storage system. Modern home security uses digital storage, of course. These are hard drives much like you’d use in your computer, except that they can storage days of information on them (depending on the size of the hard drive and the compression used). Decades ago, a bank would be using pre-VHS-era tapes, probably ¾” tapes that would record for a few hours and then have to switched out. After a few days the tapes would be reused again, erasing what was on there before.

Just as it was with TVs, there was a resolution revolution. Video surveillance would be shot at a low resolution in order to save space on the tape. Today you can get high-resolution cameras that shoot in high definition and can be played back instantly. Once again, you can think the digital recording techniques for this improvement.

Because of modern digital cameras’ ability to increase the ISO, they can shoot in much lower light than a system from decades ago. In fact, the ISO software has gotten so good that you can see in low light better than just 5 years ago. (What the future hold? Well, your handheld digital camera can probably shoot at around 6400 ISO. Canon just released one that has 4,000,000 ISO and can effectively see in the dark!)

Thanks to the invention of smartphones, harder and more scratch resistant glass has found its way into security cameras. This glass over the lens give a clearer image than ever before. Also, stronger metals and plastics also hold up better in the harsh elements.

We’re living in an age where everyone can own a reasonably-priced home security system. Ready to have yours installed? Give us a call today!