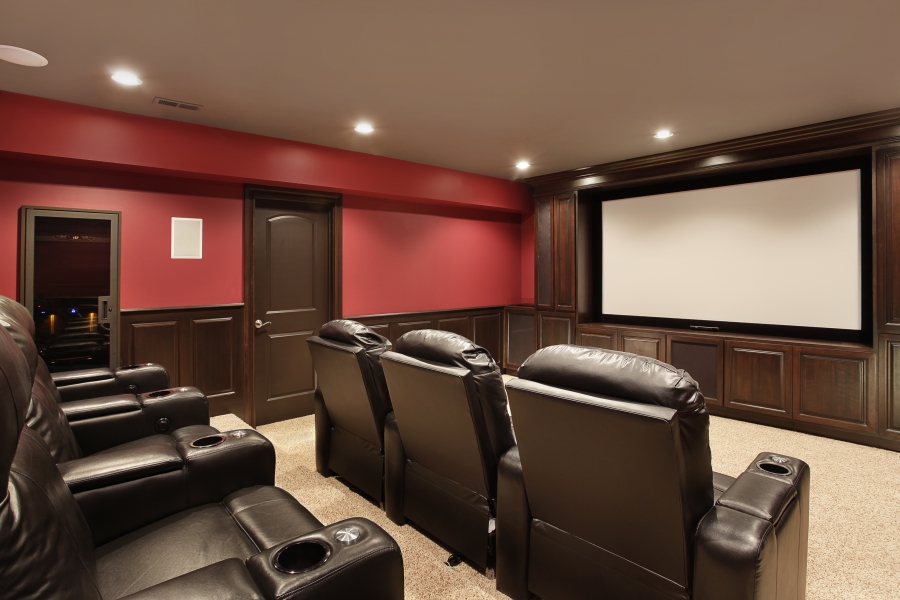 One decision you make will have a big effect on how you absorb entertainment, and that is whether you’ll be going with a large screen television or a projector and screen. Let’s talk about the advantages and disadvantages of choosing a projector with a home theater installation.

Televisions have gotten big. Really big, especially when you realize that the average size of a TV twenty years ago was 27” diagonally. Today you can get one that’s 16 times larger, a 110” LED from Samsung, if your pockets are deep enough. But when it comes to projections screen, 110” is pretty standard and only goes up from there. Screen installation is also a lot easier than TV installation at that size!

If movies are your primary interest, it’s hard to beat a projector when it comes to replicating the feel of a theater. Because screens use reflected light, our brains interpret the image slightly different than we do the illuminated light that comes from a television. That leads us to our first disadvantage, though…

A projector is almost always something that goes in a home theater. It’s not very often that you turn on the projector and have re-runs of The Office on while you’re doing the dishes. In other words, for most people a projector is used when a program is meant to be focused on. This is really only a disadvantage if the projector is the only viewing device in the house, which is unlikely. For more casual viewing, you’ll want a traditional television elsewhere in the house.

There’s a reason that movie theaters are dark,

and that has to with the reflected/illuminated difference we mentioned above. Reflected light needs darkness to be seen properly, and that’s why a home theater with a projector will require a room in which you can control light. If you have a dedicated home theater room, that won’t be a problem.

Projectors can certainly deliver when it comes to high-definition images, and can deliver advantages that a television can’t. Need help deciding which is better for your home theater? Contact McCray Communications and we’ll take care of your New Orleans home theater installation and wiring.